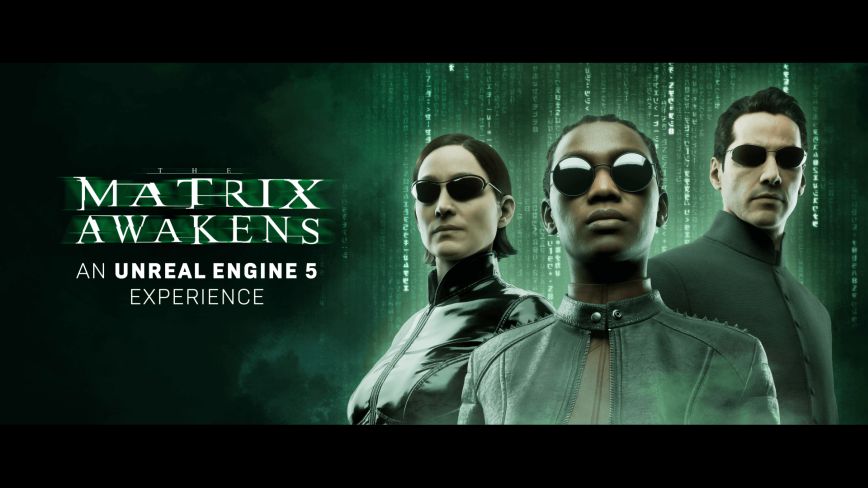 Epic Games is excited to announce that The Matrix Awakens: An Unreal Engine 5 Experience is now available to download for free on PlayStation 5 and Xbox Series X/S.

This boundary-pushing technical demo is an original concept set within the world of Warner Bros' The Matrix. Written and cinematically directed by Lana Wachowski, it features Keanu Reeves and Carrie-Anne Moss reprising their roles as Neo and Trinity and—in a reality-flipping twist—also playing themselves.

The project reunited many of the crew that worked on the seminal The Matrix trilogy, including James McTeigue, Kym Barrett, John Gaeta, Kim Libreri, Jerome Platteaux, George Borshukov, and Michael F Gay, in collaboration with teams across both Epic Games and partners, such as SideFX, Evil Eye Pictures, The Coalition, WetaFX (formerly Weta Digital), and many others.

Wachowski, Libreri, and Gaeta have been friends since the days of the trilogy. “When I told them I was making another Matrix film, they suggested I come and play in the Epic sandbox,” says Wachowski. “And Holy Sh*t, what a sandbox it is!

“I imagine the first company to build an actual Matrix—a fully immersive, persistent world—will be a game company and Epic is certainly paving the way there. It’s mind-boggling how far games have come in twenty years.

"Keanu, Carrie, and I had a blast making this demo. The Epic sandbox is pretty special because they love experimenting and dreaming big. Whatever the future of cinematic storytelling, Epic will play no small part in its evolution.” 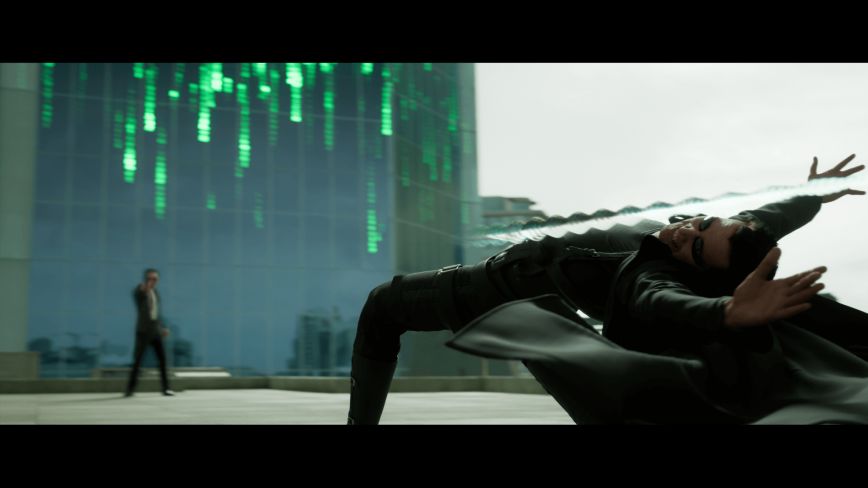 With Wachowski and many of the original crew onboard, the team set out to create something with Unreal Engine 5 that’s nothing short of spectacular: an experience that merges artforms in exciting new ways. The demo starts out with a cinematic that features exceptionally realistic digital humans, before morphing into a fast-paced interactive experience of car chases and third-person shooter action.

All of this takes place in a huge, bustling, and explorable open-world city that—like the simulated world of The Matrix—is incredibly rich and complex. Sixteen kilometers square, photoreal, and quickly traversable, it’s populated with realistic inhabitants and traffic. The experience is a tangible demonstration that UE5 offers all the components you need to build immersive, ultra-high-fidelity environments.

Despite the city’s complexity, a relatively small core team was able to create the experience thanks to a set of procedural tools including SideFX’s Houdini. Procedural rules define how the world is generated: from the size of the roads and the height of the buildings, all the way down to the amount of debris on the sidewalks.

Using this workflow, you can modify the input rules and the whole city will change, redefined by those new instructions. For small teams looking to build open worlds, that is incredibly powerful. It means you can regenerate the entire city, right up until the last day of delivery, and continue to adjust and improve it. This opens up so many creative possibilities—and proves that any team can make a triple-A-game-quality open world in UE5, irrespective of size. 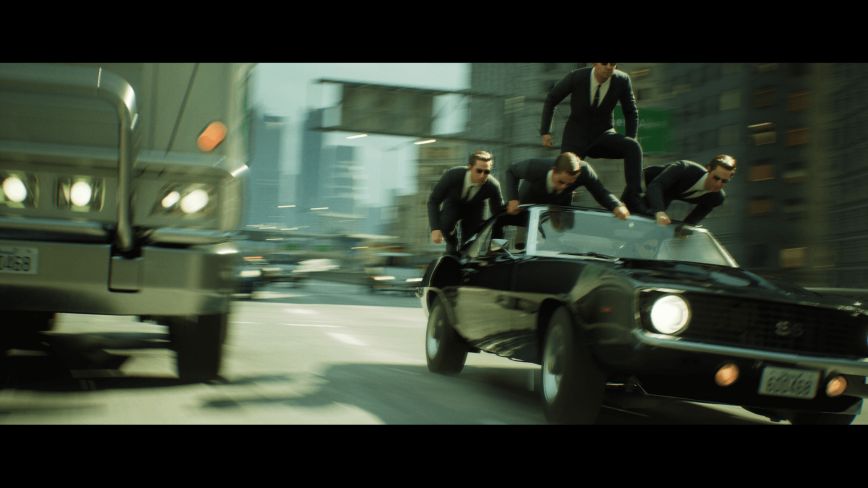 As for the city in The Matrix Awakens: An Unreal Engine 5 Experience, it’s a living, breathing environment that never stops. Because the systems that drive its actors are part of a global simulation that is evaluated continuously, the activity that takes place in the city is far more consistent and believable. Block after block, it ticks with photorealistic AI-driven characters and vehicles—whether you’re looking at them or not.

This isn’t just a demonstration of the visually stunning environments it’s now possible to build, however—it also opens the door to a completely new way of storytelling. The high-fidelity simulation capabilities of UE5 are enabling an entirely new process: cinematic creation through simulation.

Many of the action scenes in the demo originated with crew members driving cars around the city to capture exciting shots. The team was able to use the simulated universe to author cinematic content, like live-action moviemakers scouting a city to find the best streets to tell their story—but without the physical constraints of the real world.

Where our sample project Valley of the Ancient gave a glimpse at some of the new technology available in UE5, The Matrix Awakens: An Unreal Engine 5 Experience goes a step further: it’s an interactive experience running in real time that you can download on your Xbox Series X/S or PlayStation 5 today.

You can see the video ( The Matrix Awakens: An Unreal Engine 5 Experience) here!

The demo features the performance and likeness of Keanu Reeves and Carrie-Anne Moss as incredibly realistic digital humans. To achieve this, Epic’s 3Lateral team captured high-fidelity 3D scans of the actor’s faces and 4D captures of their performances in their Novi Sad studio. 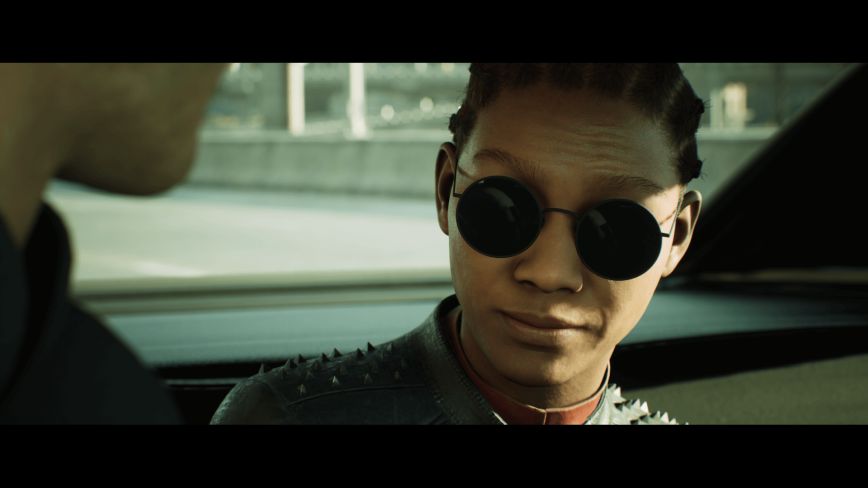 The open-world city environment includes hero character IO, who was the launch character for MetaHuman Creator, as well as thousands of MetaHuman agents, demonstrating exciting new possibilities for high-fidelity in-game characters at scale.

The movement of vehicles, character clothing, and the destruction of buildings are all simulated in engine using Unreal Engine’s Chaos physics system. During the chase experience, because the car crashes are simulated in real time with Chaos, the same crash will never occur twice. It's unique at every run. 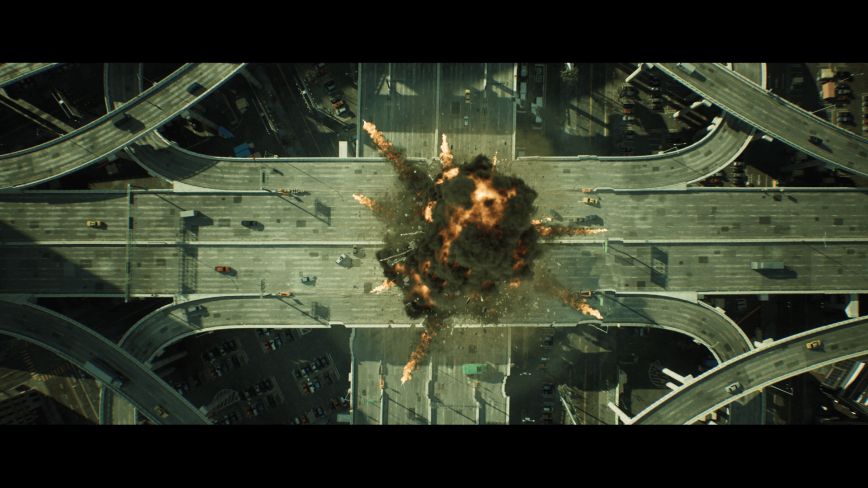 The technical demo also puts previously showcased UE5 features Nanite and Lumen through their paces. In a dense, open-world city environment, UE5’s virtualized micropolygon geometry system comes into its own.

The city comprises seven million instanced assets, made up of millions of polygons each. There are seven thousand buildings made of thousands of modular pieces, 45,073 parked cars (of which 38,146 are drivable), over 260 km of roads, 512 km of sidewalk, 1,248 intersections, 27,848 lamp posts, and 12,422 manholes. Nanite intelligently streams and processes those billions of polygons, rendering everything at film quality, super fast.

The ability to take these technologies and build vast open worlds presents thrilling possibilities as we enter the era of the Metaverse.

The Matrix Awakens: An Unreal Engine 5 Experience offers a glimpse at what those worlds could look like. They could be highly stylized like the environments in Fortnite—or they could look almost as real as the physical world.

The Matrix Awakens: An Unreal Engine 5 Experience is not a game, but this tech demo offers a vision for what the future of interactive content could be; from incredibly rich and complex cities and environments, to photoreal, visually arresting cinematic spectacles.

With the release of Unreal Engine 5, creators will have the power to build rich and varied worlds. For consumers and players, a new universe of experiences is on the horizon. And for all of us, the future of interactive storytelling and entertainment is just beginning.

Temporal Super Resolution, UE5’s next-gen upsampling algorithm, delivers four times more work per pixel than would otherwise be possible, all at the same framerate. That brings more geometric detail, better lighting, and richer effects at higher resolutions to the experience.

How to build an efficient team through continuous improvement

Wising Up in WordPress: GoDaddy Employees Teach IT Bootcamp in Serbia

From Interns to Employees: A New Batch of Enthusiastic Techies Just Finished...